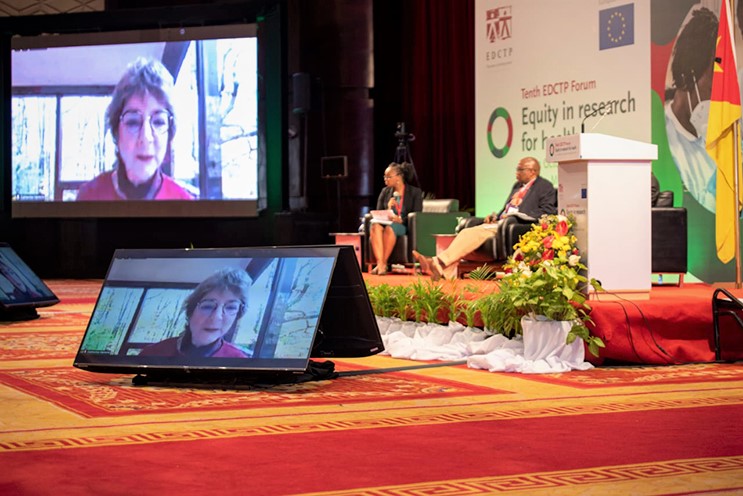 A roundtable discussion was chaired by the Forum’s Master of Ceremony – Ms Albertina Lucia Palalane. In this session, Dr Leonard Simão, Chair of the local organising committee and EDCTP High Representative for Africa, and Professor Moses Bockarie, Organising Committee Chair and EDCTP’s Director of International Cooperation and head of its Africa office, were joined (online from Canada) by Professor Catherine Hankins, who is Chair of the Forum’s scientific programme committee and of EDCTP’s Scientific Advisory Committee.

Dr Simão spoke of the importance of health workers making decisions that were based on evidence. This is well recognised in Mozambique and has been stressed in training at the National Institute of Health (INS) and the Manhiça Health Research Centre (CISM). It was therefore highly appropriate that the country should be hosting the Forum. This year marks the 25th anniversary of CISM, also making it a good time for the Forum to be held here.

Professor Bockarie clarified which aspects of the Forum will be ‘live’ and which virtual. He encouraged delegates to explore all the helpful features of the online platform.

When asked about the choice of theme for the Tenth EDCTP Forum (Equity in Research for Health), Professor Hankins said it was very appropriate indeed! There are so many inequalities relating to health research and they will all receive attention as the meeting proceeds. They include North-South disparities as well as the difficulties faced by women researchers in comparison with their male colleagues. We should focus on such issues and the Forum will provide plenty of opportunity to discuss them.

Dr Simão was asked how successful Mozambique has been in getting funding from EDCTP. He said it was difficult for Portuguese speakers to apply in English but the country’s researchers are now doing well at this. It had been made clear to them that English is the language of science and they know they must be proficient in the language. EDCTP funding provided to Mozambique had increased from €4m to €20m between EDCTP1 and EDCTP2, so Mozambicans were clearly increasingly successful in obtaining EDCTP support.

Professor Bockarie was asked what mechanisms were in place at the Forum to enable interaction between delegates in different countries. He explained that on the online platform it is possible to see the names of other delegates and then make individual contact with those with whom you wish to network. The virtual exhibition booths, networking sessions, meet-the-expert sessions and poster sessions offer another way to interact. The presenters of exhibits and posters can be asked questions about their projects.

The Master of Ceremony also asked the three panellists what each of them was most looking forward to during the coming days of the Forum. Professor Bockarie mentioned the Dr Pascoal Mocumbi Prize on Monday afternoon. Dr Mocumbi, Prime Minister of Mozambique from 1994 to 2004, had been instrumental in consolidating and developing the EDCTP programme and it was appropriate that the partnership’s most distinguished prize would now be given in his name.

Dr Simão echoed Professor Bockarie’s choice, saying that Dr Mocumbi was a shining example of what a Mozambican could achieve and an example for others to follow. He also said he was looking forward to marking 25 years of CISM, also on Monday.

Professor Hankins’ view was that everything on the programme is exciting and interesting – “There’s so much science here!” She urged delegates to give careful thought to making their own choice amongst all the scientific and sponsored sessions taking place in parallel. She also recommended: the malaria vaccine plenary on Monday co-hosted by WHO and EDCTP, the Tuesday afternoon debate (Equity in innovation, partnership, and research is a desirable but unrealistic goal), and all the prize-givings.

What did the panellists particularly recommend at the Forum for younger investigators? Professor Hankins again recommended the full use of the features of the platform to interact with others as much as possible which, of course, is what delegates usually do at conferences held in normal times!

And what makes the Forum different from other conferences? Professor Bockarie said that it showcased leadership from African leaders, ownership from Africa, and the role of African women in research. Dr Simão spoke of the Forum’s emphasis on the importance of capacity building in research.

Professor Hankins spoke of the sponsored symposia within the Forum; she urged delegates to take a close look at what was being proposed by the sponsors and highlighted how many of their sessions were closely related to the Forum theme of equity. She also recommended the presentation, within the final plenary, on the future Global Health EDCTP3 Joint Undertaking to be given by Andrea Spelberg, EDCTP General Assembly representative for Germany.

Asked for their final remarks, Dr Simão looked forward to a successful meeting; it was unfortunate that most delegates were not attending in person but we can all still take advantage of the event and indeed enjoy it! Professor Bockarie said the Forum would highlight the important role being played by African scientist. And Professor Hankins spoke of the ‘amazing support’ from the local organisers.

The MC thanked all the delegates and urged them to make full use of social media to promote awareness of the Forum using the hashtag #EDCTPForum.

We wish our followers a happy and healthy 2⃣0⃣2⃣3⃣!

We start the new year with a ➡️