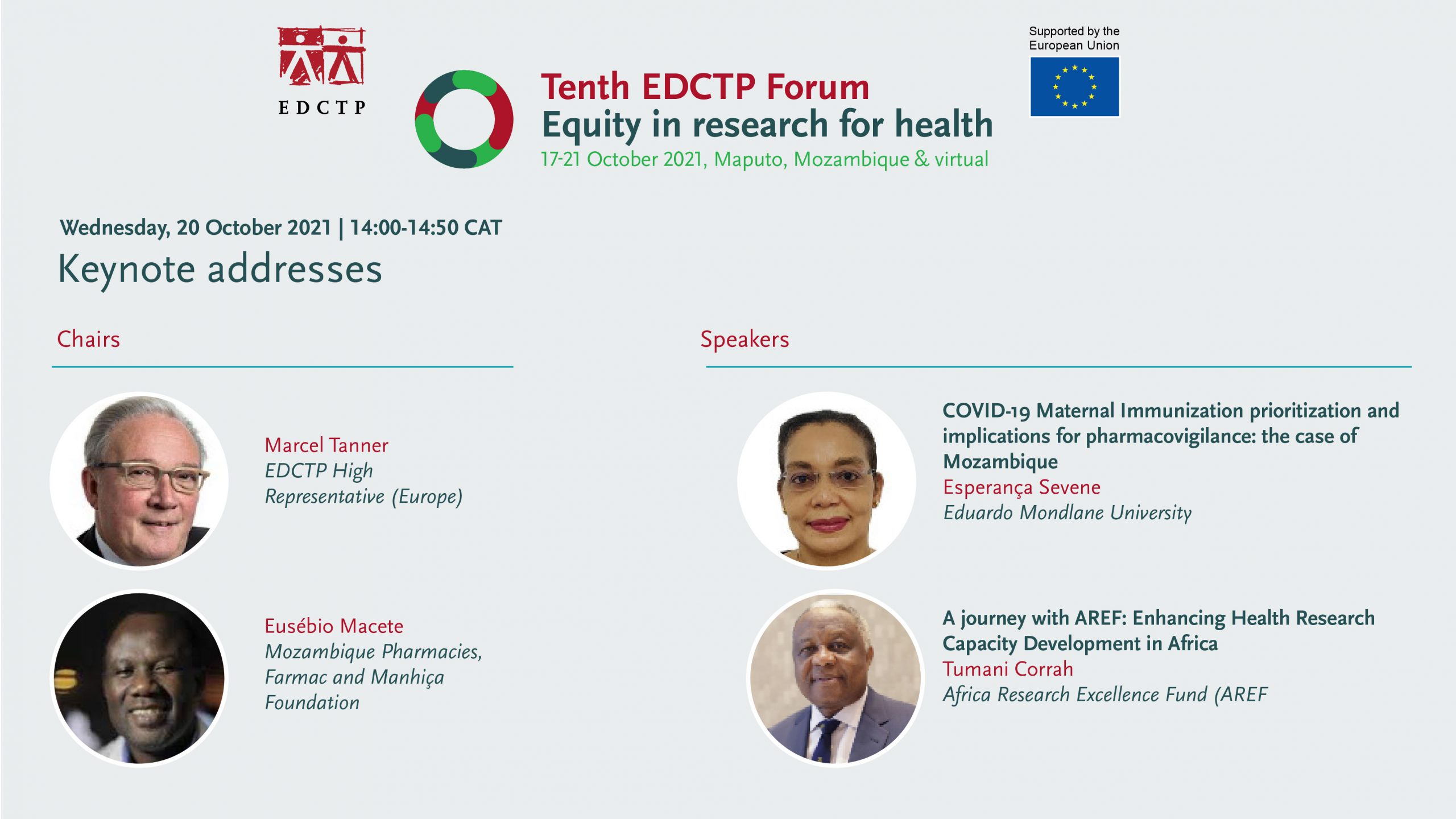 Tumani Corrah, Africa Research Excellence Fund (AREF, United Kingdom and The Gambia), began by echoing the view of Dr John Nkengasong (Africa CDC) who has stated that the story of public health in Africa is one of neglect and dependency. A new beginning is called for.

In 70 years, Africa’s population has risen from 100m to 1.25bn and it is expected to rise further. This rise – combined with deforestation, climate change and increasing air travel – is a recipe for a disease burden increase in Africa. Dr Corah described the situation as ‘precarious’, but health research and the expansion of research capacity will be useful tools to help mitigate the impending disaster.

He went on to list other persisting challenges including: the already high disease burden, the current state of Africa’s public health systems which are unacceptable and shamefully under-resourced, weak research systems, limited career opportunities for researchers, and unbalanced research partnerships. The number of research papers produced by Africans has tripled in ten years and is of rising quality, but this is still only 2.5% of the world’s total. Africa has an extractive economy: it exports crude oil and buys back petrol and lubricants; it export cocoa and buys back chocolate. He said, ‘We can do better’.

To balance African science will require a leadership that asks compelling questions and uses appropriate study designs. Data and sample collection and analysis and interpretation should be done in Africa. African scientists should be recognised and rewarded, and their research should have an impact on the health of Africans. None of the top ten health research institutions in Africa (outside of South Africa) is African owned. The time is right for Africa to grow and fund its own talent, in the way that China and India have done. ‘We can make Africa a science powerhouse!’

The Africa Research Excellence Fund (AREF) was founded to provide some solutions. It seeks to bridge the postdoctoral opportunity gap in Africa, as the current lack of opportunity means talented young researchers move abroad and work on other people’s projects. AREF aims to improve the quality and impact of health research by Africans in Africa for Africa.

To date, 310 researchers from 34 different countries have benefited: 228 have attended grant writing workshops, and there have been 46 research development fellows and 30 research and leadership participants AREF fellows have all so far stayed in the continent; they are winning grants and publishing in high-impact journals. Over 40% of fellows are female. For every £1 spent on grant writing workshops AREF fellows have won £20.

African institutions have also benefited from their links with AREF. AREF continues to attract funding for its programme but very little of this has so far come from Africa. Further details about AREF are available on: https://www.africaresearchexcellencefund.org.uk/

In the concluding part of his presentation, Dr Corah said that Africa could well be the source of the next pandemic. He asked, ‘How prepared are we?’ The poor COVID vaccination rate in Africa is because Africa is not manufacturing its own vaccines. He cited India and Cuba as countries that have demonstrated that developing nations can be effective in this area, asking ‘Why are we in Africa so dependent?’

There is an urgent need to attract research funding from within the continent. Africa must join the move to decolonise science, break away from its dependency and become a giant among giants in medical research.

We wish our followers a happy and healthy 2⃣0⃣2⃣3⃣!

We start the new year with a ➡️