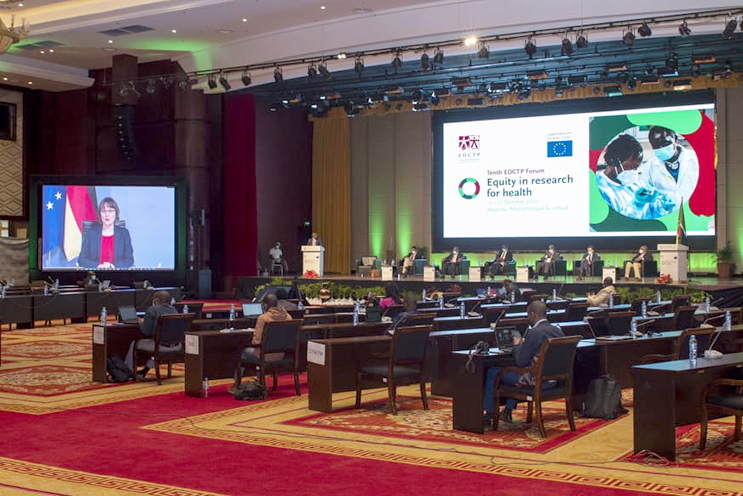 Dr Jani resumed as Chair and introduced the speakers.

Dr Michael Makanga, EDCTP Executive Director, summarised some of the key highlights of the Forum. There had been difficulties to overcome but it his belief was that the hybrid format had worked well. The attendance rate from all over the world had been very impressive.

The scientific programme had been very rich. The plenary sessions and keynote addresses had been excellent and there had been a good gender balance in the presentations. Partnership is the core of EDCTP, and the networking groups and meet-the-expert sessions have enabled interaction between Forum delegates, with the upcoming workshops set to provide more opportunities for this.

It was an honour to have the presence of the His Excellency Mr Filipe Jacinto Nyusi, President of the Republic of Mozambique at the opening, which has demonstrated the very highest level of commitment. The malaria vaccine plenary with WHO had been a key session; this is an area where Mozambique has made a big contribution. The sponsored symposia had played an important part in the proceedings. Dr Makanga had also enjoyed the lively and engaging debate on Tuesday and was pleased that the optimists had won the day!

EDCTP is showing what is possible. We have come a long way. The first EDCTP Forum in 2004 in Rome had fewer than 100 people present. One change since then is that it was usually more senior researchers who spoke, but now a younger generation is presenting. He thanked Ms Spelberg for the forward-looking view she adopted in her keynote address. Dr Makanga also referred to the prizes awarded during the Forum.

Dr Makanga concluded with his thanks to local hosts, member states who supported the event, the EU, and industry partners. ‘It is,’ he said, ‘a long list’. He also thanked the Programme Committee and the Scientific Advisory Committee, who reviewed abstracts submitted. He recommended all EDCTP Fellows to join the alumni platform that has recently been created.

Dr Leonardo Simão, Forum Local Organising Committee Chair and EDCTP High Representative (Africa) (Mozambique) said that the Forum has raised a great deal of enthusiasm. He gave thanks to the Government of Mozambique, especially to His Excellency the President, and also to the presenters and all participants.

‘What a Forum this has been!’, said Professor Catherine Hankins, Forum Programme Committee Chair and EDCTP Scientific Advisory Committee Chair. So much has changed since the Lisbon Forum three years ago. But this has given us reason to hope. So much astonishing science has been presented and so much of it has been from young researchers. The keynote addresses have helped us towards a better understanding of the issues. The posters were excellent and those who submitted posters deserve recognition for their efforts in overcoming the technical issues. The debate was stimulating. She apologised for the technical glitches that have occurred, but which have not stopped the Forum from being a great success. She gave her thanks to the Secretariat and to her colleagues on the Programme Committee. Prof. Hankins closed by asking for feedback to help design the Eleventh Forum… which we hope will be face-to-face!

The next speaker was Professor Moses Bockarie, Forum Organising Committee Chair and EDCTP Director of International Cooperation & Head of EDCTP Africa Office. He thanked the three co-chairs and all those working behind the scenes sitting at their computers and making it possible. The interpreters also deserve our thanks. The hybrid format has been a challenge but all these people have made it work.

Professor Marcel Tanner, EDCTP High Representative for Europe, described the Forum as an extremely stimulating event. It has made it clear that EDCTP can continue to be a game changer. We have looked at what it takes to translate science to policy and to society. We are now looking for a smooth transition from EDCTP2 to EDCTP3. He repeated the remark that we should not focus on why things cannot be done but on how they can be done. Let us go home and think how we can get science to have an impact. It is not about who contributes but that we are all in the same boat and we are moving ahead. When we meet in person it will be another great moment.

Mr Antonio Sánchez-Benedito Gaspar, Ambassador, Head of Delegation, Delegation of the European Union to the Republic of Mozambique, said that the challenges of the pandemic have shown the need for collaboration. The EU is committed to collaboration with Africa. The EU seeks to address the lack of effective diagnostics and treatments for the diseases that affect Africa. It wishes to enable a research environment locally and facilitate local manufacture. A new initiative has recently been launched that will help in this regard. This Forum has helped establish closer networks in health and links between European and African researchers. This is the time to use our results to benefit society and the economy.

Dr Armindo Tiago, Minister of Health of the Republic of Mozambique, said we had reached the end of an event that required a lot of preparation. He congratulated all those involved. The electronics have enabled the participation of many delegates, and the event has opened a way of enriching discussions. Participants will leave more informed and have helped to build scientific knowledge, based on international collaboration. He expressed a hope that EDCTP3 would be extended to cover other disease targets within African countries. He assured EDCTP of Mozambique’s commitment to the new programme. Acknowledging the role of the international and local committees that had made the event happen, the Minister then declared the Forum to be closed.