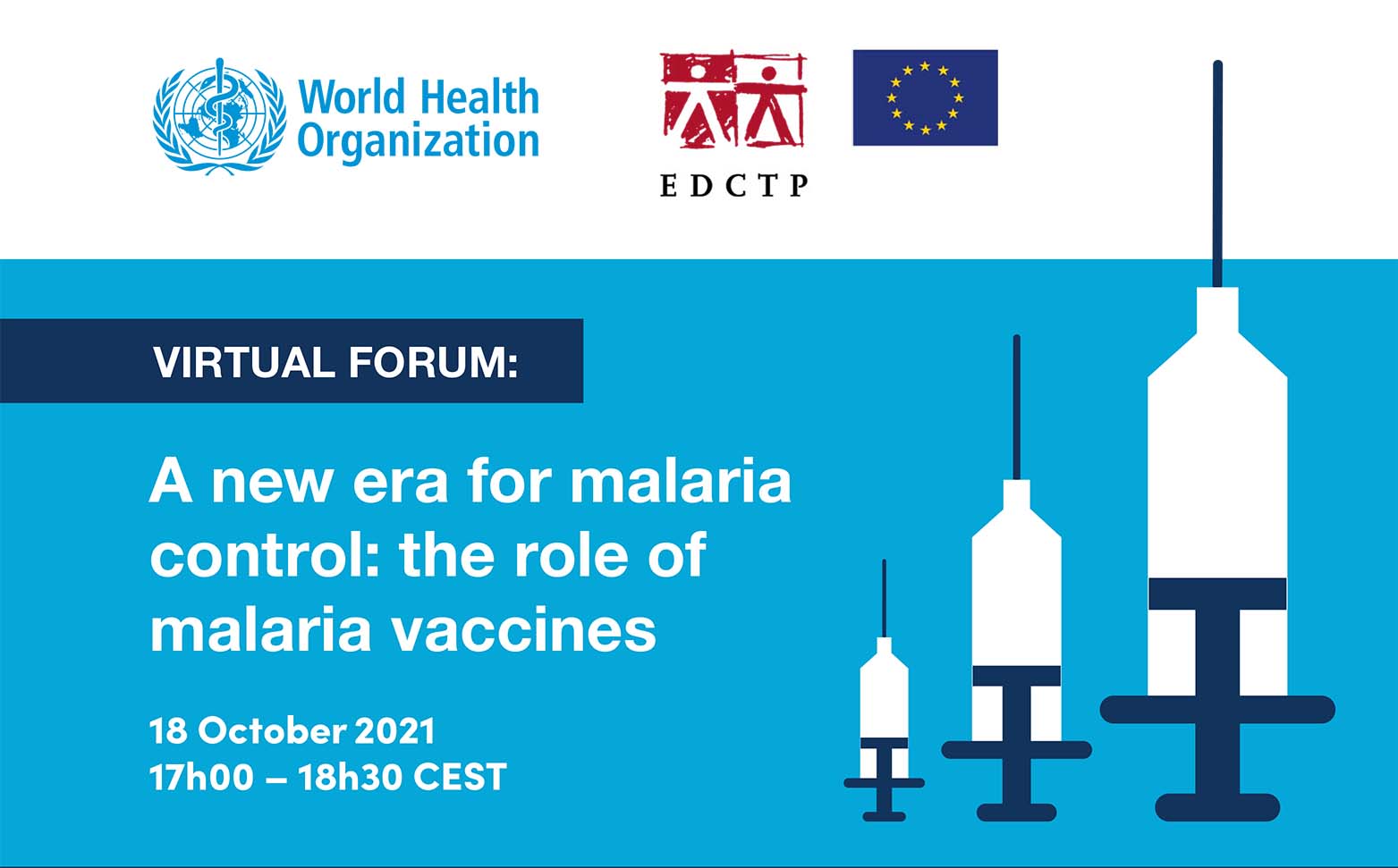 By WHO (original link)

Earlier this month, RTS,S/AS01 (also known as RTS,S) became the first malaria vaccine recommended by WHO for broad use among children in areas with moderate to high transmission of P. falciparum malaria. The recommendation was informed by the results of an ongoing WHO-coordinated pilot programme in 3 African countries that has reached more than 800 000 children since 2019.

In a virtual forum on 18 October 2021, WHO and partners shared 2 years of data from the pilot programme and discussed next steps for the broader use of RTS,S as a new preventive tool in the malaria control toolkit.  Participants also took stock of new malaria vaccine candidates in the pipeline and of new initiatives to evaluate and produce vaccines in Africa.

Co-hosted by WHO and the European & Developing Countries Clinical Trials Partnership (EDCTP), the forum was co-chaired by Rose Leke, Professor of Immunology and Parasitology at University of Yaoundé in Cameroon; Dr Kalu Akpaka, Team Leader for Tropical and Vector-borne Diseases in the WHO Regional Office for Africa; and Mrs Inmaculada Peñas-Jiménez, EDCTP Policy Officer at the European Commission.

Malaria progress at a standstill

Opening the forum, Professor Rose Leke noted: “The historic announcement by WHO on the RTS,S vaccine comes at a critical turning point in the fight against malaria. As WHO has reported in recent years, global progress against malaria has stalled and many countries with a high burden of the disease have been losing ground.”

Each year, more than 400 000 people continue to die from malaria and there are more than 200 million new cases of the disease. Sub-Saharan Africa shoulders the highest burden of the disease, accounting for more than 90% of malaria cases and deaths annually. Without urgent and accelerated action, the targets of WHO’s global malaria strategy will be missed.

In recent years, mosquito resistance to insecticides and parasite resistance to antimalarial drugs have emerged as key threats to future progress against malaria. The COVID-19 pandemic has presented an added challenge for malaria responses worldwide, undermining efforts to deliver critical prevention, detection, and treatment services.

“These trends are worrying, and they spotlight the need for the malaria community to rethink its strategy,” said Professor Leke. “Clearly new tools and approaches will be needed to beat back the disease.”

Over the last 2 years, Ministries of Health in Ghana, Kenya and Malawi have led the introduction of the RTS,S/AS01 malaria vaccine through the routine immunization platform, with the support of in-country and external partners.  The vaccine requires a 4-dose regimen and is given to children from 5 months of age.

Speaking at the forum, Dr Kwaku Poku Asante, Director of the Kintampo Health Research Center in Ghana, shared the key findings, to date, from the pilot programme:

These findings, together with those from earlier clinical trials, informed the WHO recommendation for the broad use of the RTS,S vaccine among children at risk in Africa and in other areas with moderate to high malaria transmission.

Next steps for RTS,S include key funding decisions from the international community that will determine how broadly the vaccine can be deployed, as well as country decision-making on whether to adopt it.  WHO is developing operational guidance to advise countries on how the vaccine could be used in the context of other ongoing malaria control tools.

WHO considers RTS,S as a pathfinder that could be complemented in the future by other vaccines with similar or higher efficacy. Over the last decade, the partnerships forged by EDCTP with the African research community have contributed to the development of both the RTS,S vaccine and to several new candidate malaria vaccines.

Noting that EDCTP had been a “proud supporter” of RTS,S, Mrs Inmaculada Peñas-Jiménez, a co-chair of the forum, introduced panellist discussions around other advances in malaria vaccine research and development.

Professor Adrian Hill from the University of Oxford presented the latest data on R21/Matrix-M, a vaccine that has shown promising efficacy results against malaria in a Phase 2 clinical trial among several hundred children in areas with highly seasonal malaria transmission.  Dr Stephen Hoffman, CEO of Sanaria Inc. reported on progress in the development of the PfSPZ, a vaccine based on whole sporozoite technology. The successful completion of the clinical trials will be important to assess the safety and efficacy profiles of these 2 vaccines.

Dr Özlem Türeci, Chief Medical Officer at BioNTech, spoke of a new effort to create a vaccine using mRNA technology. Inspired by the company’s success in producing an mRNA-based vaccine against COVID-19, BioNTech scientists hope to develop a malaria vaccine that will be easy to manufacture, highly potent, well-tolerated and suitable for all age groups.

“We have learned from our COVID-19 efforts that mRNA is suited to address the most important challenges in developing malaria vaccines, namely how the malaria parasite evades the immune system,” said Dr Türeci. “And it is part of our global strategy to enable production of the vaccine within countries themselves. We are committed to these efforts,” she added.

A meeting for Africa

Dr Akpaka Kalu of the WHO African Region closed the virtual session by thanking participants and noting that “this is a meeting for Africa.” He added: “We have RTS,S to take to the field and new vaccines on the horizon. We think the time is now to rid Africa of malaria.”

The 90-minute webinar was scheduled during the Tenth EDCTP Forum, a biennial conference held from 17–21 October that provides an international platform for the presentation and discussion of clinical studies aimed at combating poverty-related diseases.